Black people of South Africa have a proud and illustrious heritage, which identifies with the whole South African society. Blacks have equally played a very important role in the defence of this country dating back to the First World War.

On January 16, 1917 the Mendi troopship sailed from Cape Town en route to La Havre in France carrying the last contingent of the SANLC comprising 805 black private, 5 white officers and 17 non-commissioned officers as well as 33 crewmembers.

SS Mendi was a British 4,230 GRT passenger steamship that was built in 1905 and, as a troopship, sank after collision with great loss of life in 1917.

On the morning of 21 February 1917, another ship, the SS Darro (10 0000 tons) travelling at full speed and emitting no warning signals, rammed the SS Mendi (4 230 tons), which sank in 20 minutes. No steps were taken by the SS Darroto lower boats or rescue the survivors. She stood off and floated nearby while lifeboats from the SS Mendi's escorting destroyer, HMS Brisk, rowed among the survivors, trying to rescue them. 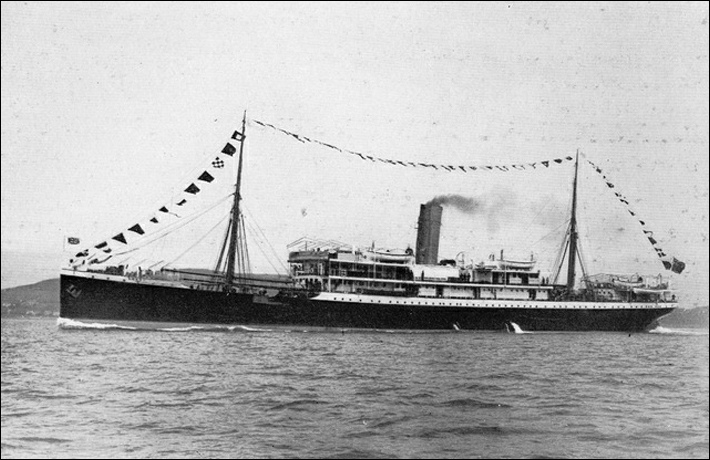 There are many stories of bravery about the men's bravery as the ship went down. One of them is that of the Reverend Isaac Wauchope Dyobha, who cried words of encouragement to the dying men.

The men sang and stamped the death dance together as the SS Mendi sank, taking with her all still on board and many who leapt into the icy waters (607 black troops along with 9 of their fellow white countrymen and all 33 crewmembers). Of note is that, regardless of clan or tribe, these men faced death together as South Africans.

Other heart wrenching tales of valour are told of those trying to survive in the freezing water. It is said that the cries of the men dying of hypothermia echoed in the misty dawn: "Ho, 'so and so', child of my mother, are you dead that you do not hear my voice?" and "Ho, to me, men of 'so and so', that we may all die together?" Joseph Tshite, a schoolmaster from near Pretoria, encouraged those around him with hymns and prayers until he died. A white sergeant was supported by two black compatriots, who swam with him and found place for him on a raft.

Among the black Africans lost were some prominent men such as the Pondoland chiefs Henry Bokleni, Dokoda Richard Ndamase, Mxonywa Bangani, Mongameli and the Reverend Isaac Wauchope Dyobha.

On receiving the news (on 9 March 1917) of the disaster, all the members of the South African House of Assembly, under the then Prime Minister Louis Botha and a celebrated Boer War hero, rose in their seats as a token of respect to their fellow South Africans who had gone down with SS Mendi. Lore has it that the black tribes in South Africa were aware of the disaster before they were officially advised by the government.

The survivors were to continue with their military service in France. One of the highlights was when some of them met the King and Queen of England at Rouen in July 1917. One of them, Koos Matli (of the Bahaduba tribe) recalled: "One day we were all called together and we went to another ship. On the deck we met King George V and Queen Mary. The King addressed us personally and thanked us for the services we had rendered. He told us that we were going home within a few days, and when we reached home we must tell our Chiefs and fathers how he had thanked us."

Like so many other military disasters, the story of the SS Mendi is a story of supreme courage in the face of death and valour shown between brothers toward each other in dire circumstances. The courage displayed by these men has remained a legend in South African military history.

The commemoration of the SS Mendi is held during February every year.

On Sunday, 28 February 2018, the Signals Association once again laid a wreath at the Memorial Parade held at the lower campus of the University of Cape Town. 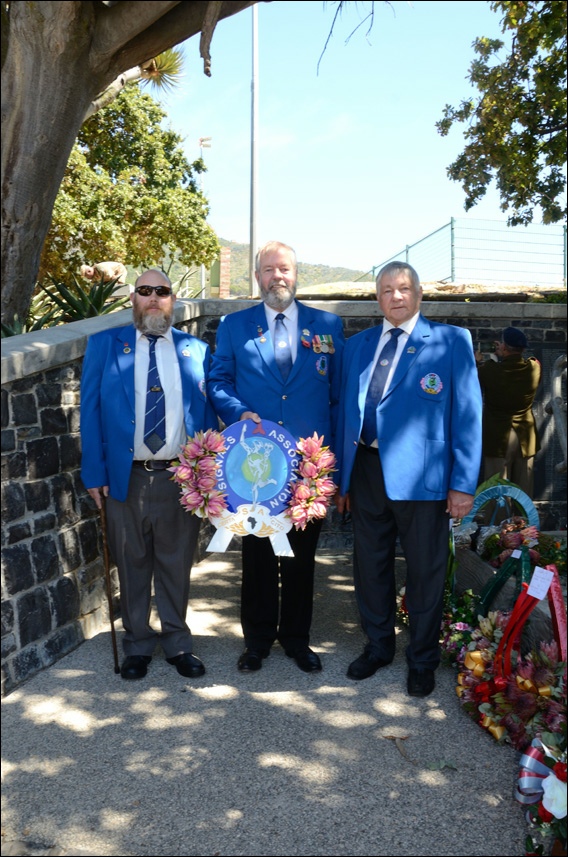 The story of the South African Native Labour Corps (SANLC), particularly the sinking of the Mendi troopship, is one of the most fascinating stories ever related in South Africa's military history.

In the photographs are from the left : Alfred de Vries (Manco Member), Pierre Fourie (Public Relations Officer who laid the wreath) and Robbie Roberts (Chairman) 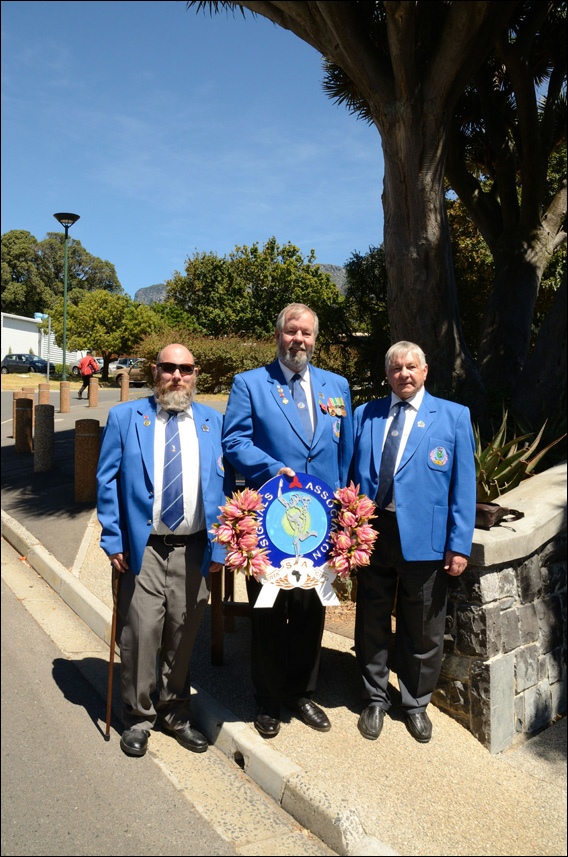