Our Third Annual Luncheon was held at the Parow Golf Course on Sunday, 5 May 2019 when 60 invited guests attended a sit down 3 course meal which, as previously, was excellent real home made cooking. The club’s Tannie Susie and Chief chef Margret, once again proved themselves outstanding caterers.

Keeping to the tradition of the Association, the Vice-Chairman welcomed all present, where after our Secretary General lighted the “Flame of the Signaller” and handed it to the Chairman for placing the burning torch into the outstretched hand of “Jimmy”, the figurine of Mercury, as the Association’s Symbol of Office.

We were extremely fortunate to have in our midst Uncle (Sgt) Syd Ireland who, at age 98, attended with five of his grandchildren. Syd, as far as we know, is the last surviving Signaller from WWII in South Africa having served with the Cape Town based 3rd Brigade Signals Company as a wireless operator in Kenya, Abyssinia, British Somalia and Egypt, spending much time in Cairo and Alexandria taking part in the Battle of El Alamein.

We were also extremely fortunate to have as our guest speaker, Naval Captain Trunell Morom who is an Associate member of our association and a long-standing Friend of ours. She has been associated with our association for many years since the time she served as officer commanding of SAS Unitie, the last SA Naval Reserve Force unit to be decommissioned.

We publish below Capt (SAN) Trunell Morom’s speech in which she pays tribute to Uncle Syd and those who served during his time in the military.

“Good afternoon everyone – I feel very privileged as a Naval Officer to be invited to talk at this very special luncheon – the third annual luncheon of the Signals Association.

Senior representatives of the Army, the Air Force and the Navy were  called upon to speak at a dinner – in that order as was in keeping with the seniority of the arms of service.  Very proud of their traditions, the Army and the Air Force both referred to the Navy as the “Cinderella of the Forces”.  The Naval Officer listened to this and eventually it was his turn to talk.  He started his talk by saying “I don’t know much about Cinderella but I do know that she had two ugly sisters!”

However -  I would like to believe that the Signallers are not one of the ugly sisters.  Like the Navy, I see them as the gentlemen of the Defence Force.  After all, many years ago, the Royal Corps of Signals experimented with crossing a woodpecker with a carrier pigeon.  They wanted to get a bird that would knock on the door before delivering the message.

Many of you will relate to what I am now going to say.  My grandparents generation lived through World War One – men volunteered to join up and fight for their country and the upholding of good against evil.  My parents generation lived through World War II – again men and women volunteered to join the Allied Forces and fight for good to conquer evil  even though they knew they could lose their lives doing so – and many did.  Many however came back having helped to establish a safe world for the next generations to be able to live peacefully.  I was fortunate – my father came back from fighting in North Africa otherwise I would not have been here! 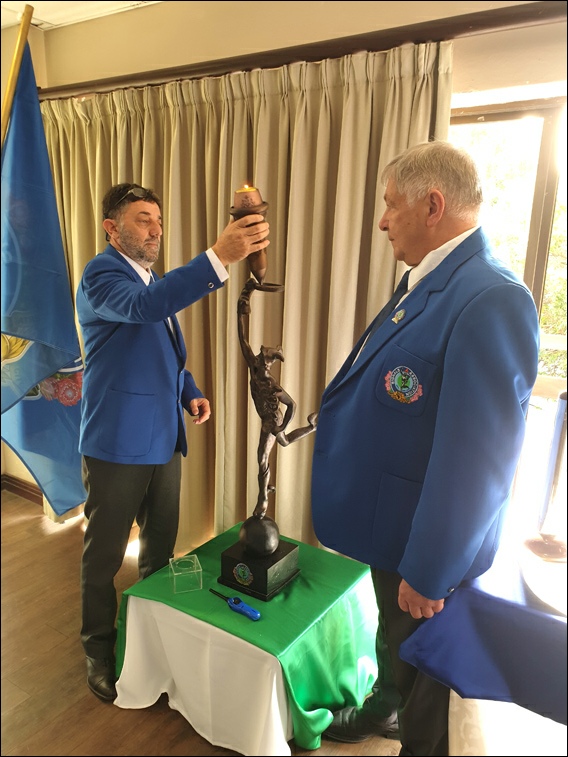 My brother’s generation lived through the border wars – as did many of you here today.  You had no choice to volunteer or not – you were conscripted.   After 1994, conscription fell away and military service once again became voluntary and still is today.

The Third Brigade Signal Company Reunion Association was started by Major Charles Holloway in 1946 and for seventy years, the Association met at least once annually for lunch – the members had all participated in WWII as members of the 3rd Brigade Signal Company, South African Corps of Signals – they served in countries in North Africa, they participated in the Battle of El Alamein – and they came home.  One can only imagine the reminiscing and the exchange of war stories at those functions – experiences that only those who had seen active service would understand.

The Signals Association (Western Cape) was established in 2000 by Lt Col Robbie Roberts – starting with 16 members, it has grown to more than 100 members, many of whom are from 71 Signal Unit.   Although through the subsequent years, the Association has not promoted itself much,  its aim is now to grow steadily and make itself visible to the outside world in the hope that it can attract the interest of as many former signallers and communicators from the Communications Divisions of the Arms of Service  worldwide.

The Association is extremely proud of its eighteen years of membership of the Council for Military Veterans Organisation (CMVO) – it was the first “Current Day” association to be registered and is the only registered and recognized military veteran organization for signallers in South Africa.

The question can be asked – if the Signals Association is celebrating its 19th Anniversary, why is this only the third Anniversary Luncheon?

I mentioned earlier that my father had fought in WWII – he was a gunner.  He was so determined to serve his country that he lied about his age when he volunteered in 1939 – growing up we could never understand why – when asked his age – he would say for example 48 army age!  He was six years older!  I don’t know much about his war experiences other than that he was in the Artillery, he did some of his training in Potchefstroom and he fought in Egypt including at Tobruk and at El Alamein.  He would talk about the camaraderie but never spoke about the horrors of the battles.   Looking back, I think he instilled in me the meaning of being a volunteer and more importantly volunteering because you want to play a role in ensuring that your country is a safe place for all.  My father was a humble man, a gentleman with enormous integrity and high values, always caring about others – a way of life and values that he instilled in his children.  He passed away in 1977.  Years later in 1997 or 1998, as a member of the Reserve, I was fortunate enough to meet three gentlemen who reminded me so much of my father – the three surviving  members of the 3rd Brigade Signal Company Reunion Association - Major Charles Holloway, Mr Timoney and Mr Sydney Ireland.

We are extremely blessed that Mr Ireland – the last surviving Signaller in South Africa from WWII  - is here with us today together with his grandchildren.  Very sadly, his daughter Jenny who was always by his side when he laid a wreath at all the annual Memorial Services passed away suddenly in December last year,  His daughter Barbara has taken over that role but unfortunately she couldn’t be with us today.

I am sure you don’t know that apart from being the most senior person here today in age – Mr Ireland is 98 – he has also recently become a television star!  Three weeks ago he was interviewed by BBC Television and a week later by a Russian Television station – in his daughter’s home.  The BBC are compiling a documentary on the Veterans of WWII which will be screened later this year.  We are not sure when the Russian documentary will be broadcast or whether we will be able to watch it.

I would like to read you a letter that was written to Uncle Syd’s mother in 1943 from his Divisional Officer.  After returning home from El Alamein, Uncle Syd was seconded to a Unit that provided a shuttle service between Egypt and South Africa – he was their communicator on the shuttle aircraft.

Mr Ireland – Uncle Syd – we are honoured that you are here with us today – you are a very special and dear person to all of us – and we are very proud of our Television Star!

But – wealth might bring sorrow, And health could fail tomorrow.

So – I shall simply say “May God continue to bless the Signals Association for many, many more years to come.

And now Ladies and Gentlemen, I ask you to join me in raising your glasses in a toast to the Signals Association on this their Third Annual Luncheon.  May there be many many more.”

Geoff Laskey, a former commanding officer of 71 Signal Unit then gave a brief talk on “The Evolution of the Military Signaller”, which guests found very interesting.

Also with keeping with the traditions of the Association, the Scroll of Honour of the 3rd Bde Sig Coy Reunion Association, together with that WWII association’s Minute Book, were put on display for guests to have a look at and peruse the 70 year old historical minutes of all their meetings between 1946 and 2016.

On 27 May 1940, some 287 Other Ranks and 7 Officers marched from the Castle past the City Hall and down Adderley Street in Cape Town en route to the station from where they travelled to Potchefstroom, then to Durban, from there they sailed to Mombasa. From there they travelled to Kenya, Abyssinia, Berbera, Egypt, El Alamein just to mention a few, all in support of the 2nd World War. These were all members of the Cape Town based 3 Brigade Signal Company, South African Corps of Signals.

The Scroll of Honour contains the names of all the members of the Cape Town based 3rd Brigade Signal Company who were included in the embarkation list of the Signallers going to War. 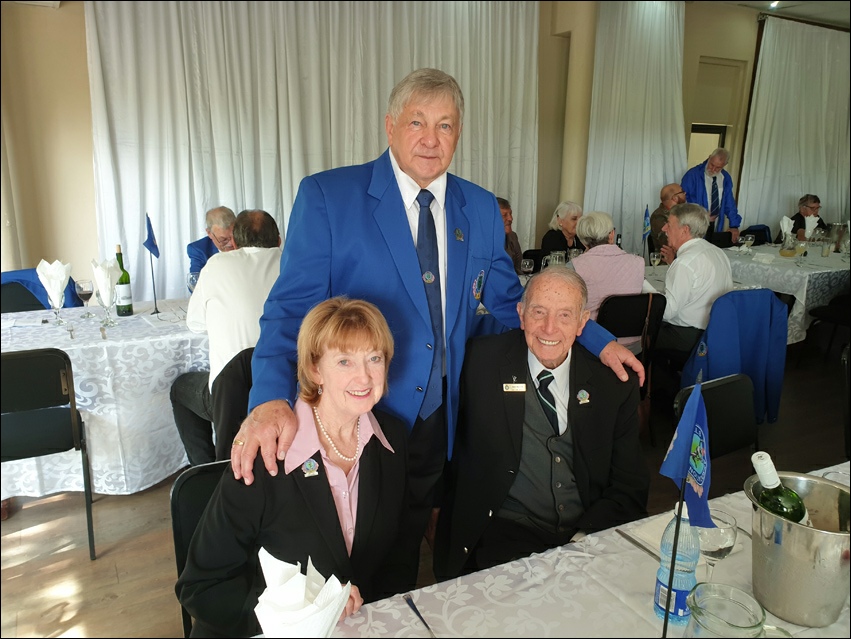 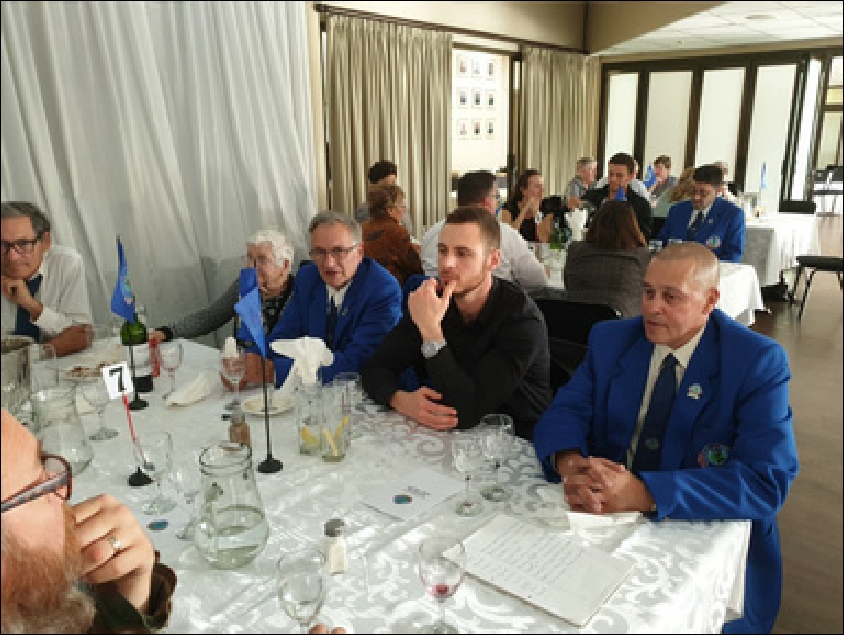 Some of the guest at the luncheon.